The pay gap between men and women in Ireland is 6.5 percent greater than it was in 2012, according to new figures.

The divide narrowed slightly between 2014 and 2015 but Ireland continues to hold a ranking of 25th place on an international league table of overall female economic empowerment.

A report published on Tuesday found that in 2015 Ireland had a 14.8 percent difference in median pay between men and women.

The current Organisation for Economic Co-operation and Development (OECD) average, according to latest available figures for 2015, is 16 percent even in situations where women are more qualified.

The data, which focuses on female workforce participation, and particularly how their roles and remunerations compare to male counterparts, has been published by PwC.

In the UK, which had an overall pay disparity of 16.9 percent in 2015, Northern Ireland had the least difference on a regional basis (6 percent)

The proportion of women directors in Ireland actually dipped between 2000 and 2013 (from 10 to 9 percent) before starting to rise in 2014.

The 2015 Women in Work Index shows gradual progress toward greater “female economic empowerment” across the OECD.

It is a weighted average of various measures including equality of earnings, the ability of women to access employment opportunities and job security.

Highest achievements are found in the Nordic countries – Iceland, Sweden and Norway take the top three spots in that order. 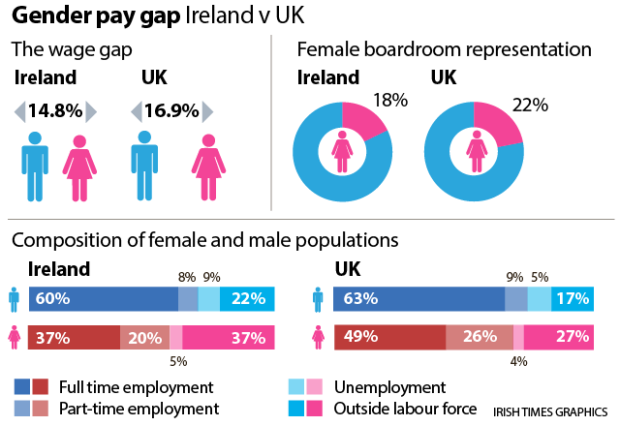 Ireland holds firm in 25th position (it held the same ranking in 2000), a low position in a 33-strong field but above European neighbours Italy, Spain, and Greece.

However, Ireland is on the right track – analysis shows that, based on the current rate of convergence in the pay gap, it could be entirely closed within 20 years.

That compares to a 50-year span for most countries, including the UK, and 100 years for others including the US. Still others, such as Germany and Spain, lag further behind and may take up to 300 years to achieve parity at current rates of progress.

According to PwC, the potential long-term economic gains across the OECD from an increase in women in work would boost GDP by almost $6 trillion.

“In this day and age it seems unconscionable that women are still paid relatively less than men,” the report notes.

“Inequality starts at a young age: a UK survey by Halifax shows that boys get 13 percent more pocket money than girls. Today the average working woman in the OECD still earns 16 percent less than her male counterpart, despite becoming better qualified.”

PwC says the political and business community can do more to tighten the gap and bring about equilibrium. In particular, it cites access to affordable childcare and shared parental leave on the policy end while employers could make working options more flexible.

In the UK, the largest disparity in pay is found in the financial services sector (34 percent). The gap is 23 percent in professional and technical services, 20 percent in construction, 15 percent in education and drops to 12 percent in administration and support services.